Home Matt Temple
Matt Temple is Director of Bands at New Trier High School in Winnetka, Illinois, where he teaches three wind ensembles and one jazz band. Under his direction, the New Trier Symphonic Wind Ensemble has performed at the Midwest Clinic, Music for All National Concert Band Festival, Illinois Music Education Conference, University of Illinois Superstate Festival, and Chicagoland Invitational Festival. They have also performed in the Sydney Opera House, Carnegie Hall, Chicago Symphony Center, and throughout Italy. In 2014, the New Trier band program was recognized by the National Band Association as an inaugural national winner of the Blue Ribbon Award for “Programs of Excellence.”

Mr. Temple currently serves as the Second Vice-President of the National Band Association and is humbled to be a member of the recently formed IDEA committee. As a contributing editor for The Instrumentalist magazine, he has authored many articles over the past decade and has also served on the Advisory Committee for NAfME’s Music Educators Journal. Mr. Temple has received the NBA Citation of Excellence multiple times, and in 2015, he was recognized by his colleagues with the Outstanding Chicagoland Music Educator Award. A strong advocate for student-centered instruction, Mr. Temple is Past President of the Illinois committee for Comprehensive Musicianship through Performance (CMP). He has presented sessions on music selection, score analysis, student-centered instruction, and innovative band curriculum at multiple universities, state music conferences, and twice at the Midwest Clinic. He frequently serves as a clinician and guest conductor throughout the United States.

Mr. Temple earned his bachelor’s degree in music education from the University of Illinois at Urbana-Champaign, a master’s in conducting from Eastern Illinois University, and an additional master’s in educational leadership from Aurora University. Prior to his appointment at New Trier, he served as the Fine Arts Chair at Waubonsie Valley High School in Aurora, Illinois, from 2000-2007, and as the music director at Flora High School from 1994-1998. Mr. Temple has been elected into the prestigious American Bandmasters Association, American School Band Directors Association, and the honorary society, Phi Beta Mu. Other professional memberships include the Illinois Music Educators Association, National Association for Music Education, and National Band Association.  He resides in Arlington Heights, Illinois, with his supportive wife, Maureen, and their teenage twins, Aiden and Annabelle. 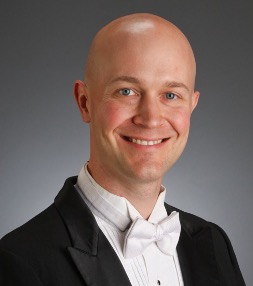