Home Cliff Croomes
Cliff Croomes serves as the Associate Director of Bands and Director of the Longhorn Band at the University of Texas at Austin. He teaches courses in conducting and conducts the UT Symphony Band. Prior to his return to Austin he served as the Assistant Director of Bands at Louisiana State University and the Music Director and Principal Conductor of the Civic Orchestra of Baton Rouge. Dr. Croomes holds both his Master of Music and Doctor of Musical Arts degrees from LSU. Prior to his time in Baton Rouge, Dr. Croomes served as the Director of Bands at Georgetown High School in Georgetown, Texas. Under his baton, the Georgetown Wind Symphony was named a 2014 Mark of Excellence Commended Winner. Earlier in his career Mr. Croomes was the Associate Director of Bands at Douglas MacArthur High School in San Antonio, Texas. He has also taught at Westview Middle School, Pflugerville High School and Bastrop High School. He has also had the pleasure of serving on the faculty of the University of Texas Longhorn Music Camp from 2001-2014. Dr. Croomes earned his Bachelor of Music Studies degree from the University of Texas at Austin Butler School of Music and is an alumnus of the Cavaliers Drum and Bugle Corps from Rosemont, Illinois.

He has performed with ensembles throughout the United States, London, Paris, Switzerland, Germany, and Italy as well as serving as an international consultant throughout Japan. He has served as an adjudicator and clinician for marching and concert bands throughout the states of Texas and Louisiana. Dr. Croomes holds an artist/educator endorsement with Innovative Percussion Inc. and is a founding board member of the composer diversity initiative “And We Were Heard” as well as a member of the Dr. William P. Foster Project advisory board. Dr. Croomes holds an honorary membership in Kappa Kappa Psi as well as professional memberships in the Texas Bandmasters Association, Texas Music Adjudicators Association, the Percussive Arts Society, Louisiana Music Educators Association and the Texas Music Educators Association. 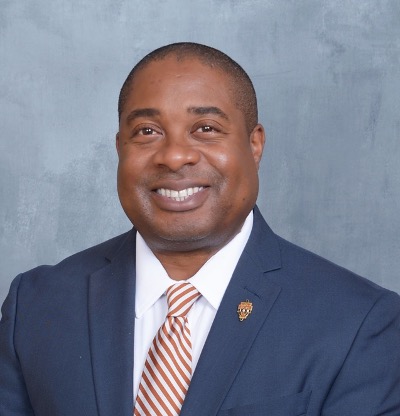